In addition to offering legal consulting services, we also provide a wide range of interesting information about the law in hopes of educating the public
ArticleVideos

Recognize Differences in Rejected Verdicts and NO Verdicts

SARI LAW OFFICE When filing a civil lawsuit to the court, there are 3 rulings that can be decided by the judge, namely The Verdict Received, The Verdict Rejected and the No Verdict (unacceptable). For some people may not yet know the difference between the Rejected Verdict and the NO Verdict (unacceptable). Therefore, we have described it briefly in an article titled "Recognize differences in Rejected Verdicts and NO Verdicts"

What Is a Rejected Verdict and NO Verdict?

Rejected Verdict is a verdict on a case that has been examined up to the point of its case, while the No Verdict (Niet Ontvankelijke Verklaard / Unacceptable) is a ruling stating that the lawsuit is unacceptable for reasons of disability lawsuit formil. So against the verdict NO can be filed a re-lawsuit

Some Reasons for Verdict NO:

How to Avoid Verdict NO

In filing a lawsuit, the parties involved must be thorough first, the object must also be clear, the comparison, the limits, if it gets wrong, must be a new lawsuit.

Criminal and Civil Checks Simultaneously? Better Do This!

Sari law Office – When sued or exposed to legal problems, most people who feel objectionable will probably do some resistance, one of which is to try to report to the police (criminal). However, being sued is a non-criminal (Civil) matter. Then there is no denying that a person can be examined criminally and civilly simultaneously. It's best to do this given that there's still a way to deal with it: request a suspension of police checks. Is this way well done? What is the legal view of this way? Everything we've covered in the article titled: "Criminal and Civil Review Simultaneously? Better Do This!"

1. Requesting Deferred Investigation by The Police is Important

We can request a deferred investigation by the police pending a civil verdict of the lawsuit that has been filed in advance.This is important given that criminal and civil checks can simultaneously interfere with other ongoing legal proceedings. Therefore,

We should not hesitate to request a deferred investigation by the Police as it is a legal right. If anyone says it's wrong, we can oppose it because it's mentioned in Supreme Court Rule No.1, 1956 ("Perma 1/1956"). in article 1 Perma 1/1956 stated:

3. No Need to Worry, Requesting Deferred Examination by Police Is Often Done

For example, the police report in Bali Police, A warga mengwi reported by B warga mengwi also on charges of making a false pedigree. Police were called multiple times to reports to be examined after other witnesses had been examined. On the other hand, the A is suing the genealogy in question and the object of the land referred to in the lineage so that with evidence there is a case in the civil court finally the police examination can be suspended or postponed.

Thus, if there is a criminal case to be decided on a civil matter or about a legal relationship between two specific parties, the examination of the criminal case may be suspended, pending the decision of the Civil Court.

Sari Law Office – In criminal justice, we often hear the terms of criminal law. From that term, many people do not understand or are still public about the law. Therefore, on today's occasion, we summarize 10 criminal justice terms that need to be known. Elaborated in full with their respective explanations to be easy to understand and can add insight into our laws.

A report is a person's notice due to his or her obligations or his or her rights under the Law to the authorized official about having, being, or suspected of a criminal event.

A complaint is a notice accompanied by a request from an interested party to the authorities to crack down on the law of a criminal who commits a complaint that harms him.

An investigation is a series of actions of investigators to search and gather evidence to make light of the crimes that occurred and find the suspect.

An item can be referred to as evidence if it meets the following elements:

the prosecution's claim stipulated by the public prosecutor to be filed after the examination at the trial is declared complete which contains the prosecution demands for the defendant.

confinement is charged to the offender or in exchange for a criminal conviction that is not paid, for between 1 day to 1 year, but can be extended as a maximum prison term of 1 year 4 months and there is a duty of employment that is lighter than the work obligation of the convicted prison

imprisonment is impose on the offender for life or for a certain period of between 1 day and 20 consecutive years and is charged with certain work obligations within the term of the sentence. 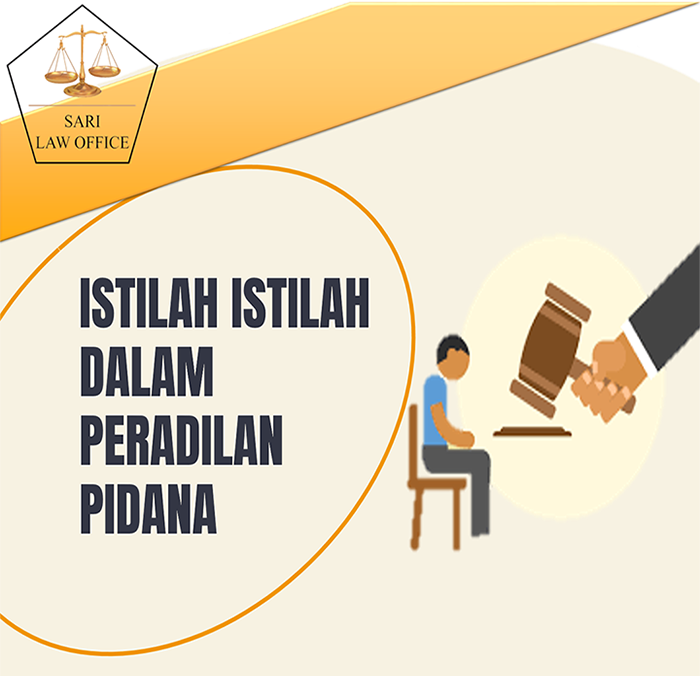 Sari Law Office – In criminal justice, we often hear the terms of criminal law. From that term, many people do not understand or are still public about the law. Therefore, on today's occasion, we summarize 10 criminal justice terms that need to be known.  It's succinctly packaged to be easy to understand and can add insight into our laws.